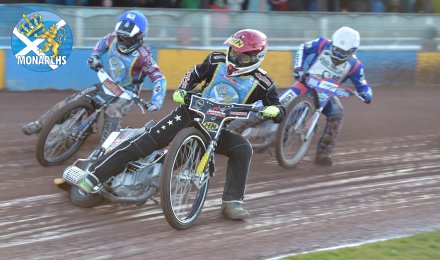 The Border Roofing Monarchs started the evening with two of the normal 1-7 missing, and lost Craig Cook after a very unfortunate heat 11 crash, but were still comfortable winners of their first Premier League match of the season by 53-39 against Scunthorpe.

It took Monarchs four heats to get ahead, and when they did they had Max Clegg to thank for an excellent ride, backing up Craig Cook to a 5-1 over no less than Theo Pijper.

Thereafter it became obvious that the home heat leaders were going to dominate the match, and both Sam Masters and Kevin Wolbert strolled to 15 point maximums without being remotely challenged.

Craig Cook also won his first two races but in heat 11, having made the start, he shed a chain in an awkward position coming out of the second bend. He went heavily over the handlebars and needed treatment. He made his own decision not to take his fourth ride, with a bent bike and the match safe.

We’re hopeful he will be OK though he was a bit shaken. Of course he is due to fly out to Italy for his GP qualifier on Sunday.

Guest Kevin Doolan proved a good choice, though he suffered bike problems in his first and last rides which cost him points.

With the home heat leaders so dominant, the best tussles of the night involved Max Clegg and Nike Lunna, particularly heat 12 when Clegg’s persistent efforts throughout the race finally paid off as he caught the young Finn on the line.

Rob Branford wasn’t on his best form, starting with a heat 2 fall and a heat 4 tape touch, but he did manage to pick up three third places.

For the Scorpions Carl Wilkinson was consistent with five second places, one a TR, but their only race winners were Lunna in heat 2 and Josh Auty in the rerun heat 11 after Cook’s crash.

Theo Pijper was consistent but we’ve seen him better at Armadale.

Scunthorpe were certainly colourful with a range of purple, orange, pink, black and white amongst their race suits, but they are sure to be more formidable on their own track on Monday especially if Monarchs are in a bit of a patched-up state.