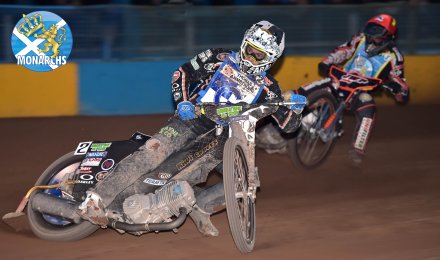 PL RESUMES WITH THE COMETS

The Border Roofing Monarchs return to Premier League racing with a visit from Workington Comets to Armadale on Friday.

They will have ten-year Monarch Matthew Wethers in their side now that our former captain has resolved his visa issues, plus their Danish spearhead of Kenneth Hansen and Rene Bach. Monarchs are unbeaten in the League after four matches and have matches in hand over the other sides at the top of the table, so naturally will be looking to extend this against a team who haven’t done themselves justice on recent visits.

SAM A LEICESTER LION: As has been recently announced, Sam Masters has now taken on a doubling up role with Leicester Lions.

He made his debut at Poole tonight (Wednesday), a very tough start.

He won his first race ahead of Chris Holder, Jason Doyle and Davey Watt but ran into machine trouble in his third race, finishing on 4+1.

GP SUCCESS: Also this week we had cause to celebrate the qualification of Sam Masters and Kevin Wolbert for the GP Challenge semi-finals on 27th June.

Sam scored 12 to finish second, Kevin was fifth with 11, both excellent displays.

The venues for the next stage are Riga (Latvia) and Terenzano (Italy).

The end product of all this is the three places for next year’s GP for the top three in the GP Challenge, a very distant target indeed.

PREMIER LEAGUE: Current standings see Somerset and Peterborough leading the PL with 16 points, the Rebels having raced 6 matches and the Panthers 5.

RORY’S INJURIES: As with everyone in speedway, everyone at Armadale will be keen to send every good with to former Monarch Rory Schlein, a man who certainly has never forgotten where he started his UK career, after his bad crash in Poland last weekend. He has two broken vertebrae and the recovery period will be long, but the speedy work of the medical staff has been a big success.

COMETS HOPING FOR BETTER: Workington have been rated one of the leading PL sides for some time, and yet they have rarely done as well at Armadale as they should be capable of.

Ricky Wells, Rene Bach and Kenneth Hansen are all riders of international repute, and are bound to score well.

Will the rest step things up this time? The team scored 37 on their last visit. Matthew Wethers is now a few meetings into his comeback and can surely do better than the rider he has replaced, the injured Rusty Harrison, who scored 1 on that occasion.

Kyle Howarth is away at a World Under-21 round, and rider replacement applies which will allow Bach, Wells and Wethers to take rides – they surely can score more than the 3 points Kyle got last time.

So on that analysis there is scope for improvement. Who can tell in speedway? You’ll need to come along and find out on the night.

NEXT MEETING: Ipswich Witches will be the visitors in the Premier League on Friday 5th June.