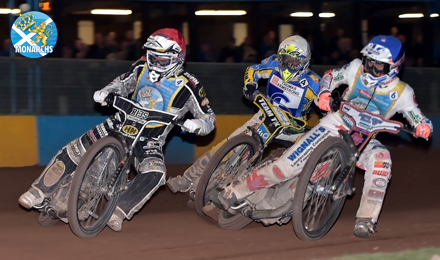 Late changes to the Workington team suggest that the Border Roofing Monarchs will have a slightly more difficult task in picking up three league points at Armadale on Friday evening.

Kenneth Hansen crashed heavily into the safety fence at Derwent Park on Monday night in their match with Berwick. and although he walked away from the incident he took no further part in the meeting. On Thursday night in Sweden he scored 10 + 1 from his four rides but is not fit to travel to Scotland on Friday and the Comets have secured the services of a much better guest in Theo Pijper.

Also missing will be Nicki Barrett. He has nerve damage apparently and is in Denmark receiving treatment. As the scorer of 4 points in his 12 rides so far at Armadale and one of them was earlier this season in a three man race, popular Liam Carr will be a more than welcome guest in his place.

The Comets will be using rider replacement for Kyle Howarth who is on his way to a World Under 21 qualifier in the Czech Republic.

Busy Sam Masters, after making his Leicester debut on Wednesday night, was guesting for King's Lynn in their home match with Poole on Thursday evening. He scored 9 and 3 bonus from his 5 rides as the Stars just held on to win by 3.