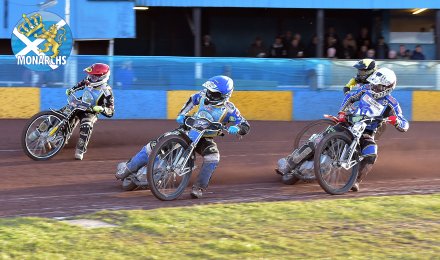 The Border Roofing Monarchs won their fifth successive Premier League match at Armadale tonight, beating Workington 56-36, consolidating their third place with matches in hand over Sheffield and Peterborough above them.

After losing the opening heat 4-2 to a clever ride by Comets’ guest Theo Pijper, the home reserves gave their team the lead with a 5-1 and they never looked back.

There were no maximums on the home side but everyone won at least one heat other than Rob Branford, who took a paid win in that heat 2.

For the Comets, Ricky Wells, Matthew Wethers and Theo Pijper all won races and from a position of 37-19 after heat 9, they only dropped a further two points behind. However they never threatened to pick up a point.

Kevin Wolbert had another fine meeting and stayed unbeaten till the final heat, when Wells headed home the Monarchs’ pair. Partner Justin Sedgmen was unbeaten after three rides but could not catch Wethers in heat 14 or Wells in the last one.

Craig Cook was dominant in his first three races but after missing the start in heat 13 he slid off on the first corner and suffered an exclusion.

Sam Masters was a bit concerned post-meeting that his best engine, which he had a problem with at Poole on Wednesday, was not performing as he wanted, and only after he changed bikes did he romp home in his last two heats.

Ten points for the reserves was another good return and both rode well, with Erik Riss contributing 4 which included a heat win over TR Rene Bach in heat 8. Erik will go down to reserve from next Friday with Rob Branford coming up into the team.

No-one would have been unhappy to see Matthew Wethers finish with a win in heat 14, or to see Liam Carr improving as the meeting went on after his lengthy absence through injury.