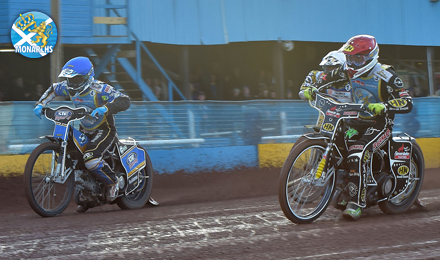 Although the Border Roofing Monarchs are entering a quiet spell with our next match not until next Friday our riders are keeping very busy.

Sam Masters made his home debut for Leicester on Saturday night and scored six points in his first three races before having a first bend fall in his last race. The Lions won that meeting against Wolverhampton and Max Clegg scored one for the Wolves.

Sam flies to Poland on Sunday and lines up at number 1 for Lublin in their away match at Rawicz. On the same day Rob Branford has a guest booking for Berwick at Rye House and Max Clegg was due at Buxton for Cradley although that has been an early victim of the weather.

Monday has Craig Cook at Belle Vue for their match with Lakeside. Later in the week, on Thursday, Sam Masters and Erik Riss are at Olching of the German Open and on the same night Justin Sedgmen is in Sweden for the Avesta Masters.

They'll all be back at Armadale on Friday for the re-arranged match with Ipswich. The Witches all hit form big time on Saturday night and produced the biggest win so far in the Premier League this season by defeating Redcar by 65 to 25.