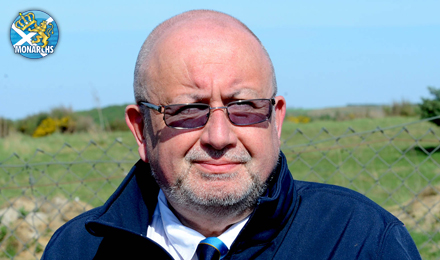 We are greatly saddened today to have to inform supporters and indeed all in speedway that Monarchs’ director Brian Gray has died.

He collapsed in Edinburgh yesterday, and promoter John Campbell received a telephone call from a neighbour of Brian’s with the terrible news, which has since been confirmed. John said “Brian had made a huge impact in a very short time and will be greatly missed. I am in shock with this dreadful news.”

Brian has been a club director only since November 2012 when he made a personal donation at a very difficult time for the Monarchs. Since then he has worked tirelessly, and with a smile on his face, taking on the job of ‘meeting and greeting’ the fans as they have entered the stadium. He has become a very popular figure indeed, known as Uncle B and writing a cheerful weekly article for the website.

Additionally he had taken on the job of encouraging the junior riders, and as had been recently announced, he had found a venue for a junior track. It’s impossible to say at this stage what will happen to this as it was Brian’s personal initiative.

While several of us had known Brian for many years, he was quite a private person and we don’t have a great deal of knowledge of his personal circumstances. We do know that he had been living alone in recent months.

Brian was someone we could turn to, to cheer us up in difficult times. He is a great loss to the Monarchs as well as many of us personally.

We will of course try to keep everyone informed of funeral arrangements. Frankly everyone is so

shocked and saddened by the news, it is difficult to give any thought to anything else.

However the match with Berwick tonight will go ahead as planned.