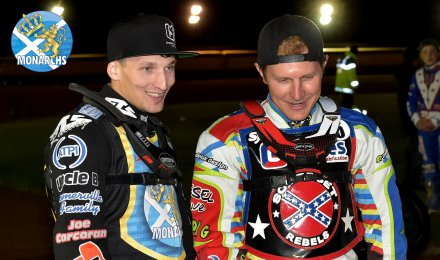 The Border Roofing Monarchs and Somerset Rebels are creating something of a modern legend for themselves with their regular battles for trophies, and the two sides are at it again on Friday at Armadale when they race the second leg of the Knockout Cup Final for 2015.

Somerset lead 49-41 from the first leg at their track. These two sides of course have raced each other in the Premier Championship Final over the last two seasons, winning one each, with the 2014 clash being in most people’s eyes probably the most dramatic speedway event they have ever seen.

THE FIRST LEG: Inspired by Craig Cook, Monarchs fought a determined rearguard action at the Oak Tree Arena on Tuesday to restrict the deficit to 8 points.

Cook scored a 15 point maximum, the first by a visiting rider for 5 years, and he broke Leigh Adams’ 8 year old track record! You can’t do a lot better than that.

The others battled away, no-one consistent but everyone doing something, and the team were reasonably pleased with the outcome.

John Campbell was keen to praise their efforts saying “It was an unbelievable performance. I thought they were going to be beaten by more but they fought back so well. We have a good chance but we know how good a team Somerset are and we will need to be at our best.”

There was a bit of controversy in heat 12 when Charles Wright was excluded when Erik Riss flew off the back of his machine at the first bend.

It could have gone either way but Monarchs scored a 5-1 in the rerun.

Erik Riss said “He didn’t hit me but I saw him look across and he just kept moving out, there was absolutely nowhere I could go. If I had shut off I would have gone into the fence, there was so much dirt out there.”

INJURIES: It would be good to report that both teams will be at full strength on Friday and that is possible – both Kevin Wolbert and Max Clegg will assess their fitness in time for Friday’s event.

PREMIER PLAYOFFS: The next big thing for the team comes straight after the KO Cup Final with Monarchs heading for Peterborough on Sunday for the first leg of the Premier Championship Playoff semi-final. The return is at Armadale on Friday 9th October.

SPONSORS ON FRIDAY: The second leg of the Knockout Cup Final on Friday will be sponsored by our good friends Keyline Broxburn.

REBELS ALWAYS THERE: Somerset have developed the habit of being in at the death of everything in recent seasons, and here they are again. They looked in great form in the first leg and probably feel they should have a bigger lead.

On recent Armadale form it would be Richie Worrall and captain Josh Grajczonek who represent the biggest threat. Richie is a regular choice of guest for visiting teams while Josh had scored 5 from 2 heats on his last visit when a machine problem caused him to crash.

Of course Australian Brady Kurtz is recognised as a world-class prospect and one of these days he will have a good meeting here!

Paul Starke and Charles Wright are both steady riders, and with Rasmus Jensen dropping to reserve on the October averages, he could be a major threat. He must be the strongest reserve in the League.

FOURS FINAL: Of course before we even reach Friday the Border Roofing Monarchs compete in yet another Final, this time the Fours at Redcar on Thursday. This is the conclusion of the meeting abandoned at Peterborough in August. It will be contested between Newcastle, Ipswich, Somerset and Edinburgh with the Monarchs’ Four being Craig Cook, Sam Masters, Justin Sedgmen and Erik Riss.

LAST MEETING: The Border Roofing Monarchs beat Glasgow 55-34 in the first Leg of the League Cup Final last Friday, finishing the job with a 45-45 draw at Ashfield on Sunday to retain the League Cup.

NEXT MEETING: On Friday 9th October we race Peterborough in the second leg of the Premier Playoff Semi Final (away leg this Sunday).