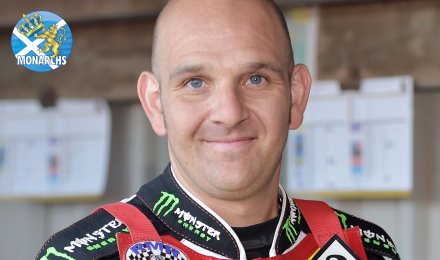 American Ryan Fisher will return to the Border Roofing Monarchs next summer after an absence of five years. He has previously been a member of two Premier League title winning Monarchs’ sides, topping the averages on both occasions.

Ryan first joined the club in 2008 after riding previously for Coventry, Oxford and Belle Vue, and his three seasons at Armadale were a tremendous success. His debut season saw Monarchs land the title for the second time, then after being runners-up in 2009 they returned to the pinnacle in 2010 with Fisher achieving an average of over 10, which placed him in the top ten of single-season contributions by Monarchs’ riders.

After that memorable year he returned to the Elite League with Coventry, and his fortunes have varied since then. Most recently he has been at Plymouth in the Premier League, and last year finished as the Devils number one with an average of 7.52.

Now 32, he has never hidden his desire to return to Armadale and he now gets his wish, giving Monarchs a heat leader trio of Sam Masters, Kevin Wolbert and Fisher.

It was also announced at the Video night tonight that Masters will be team captain in the 2016 season.