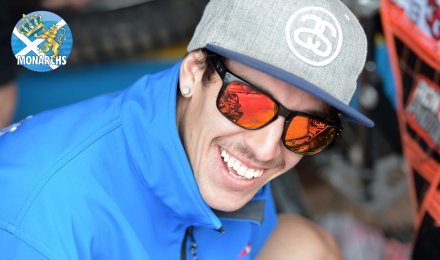 Courtesy of Down Under supporter Howard Williams, we can bring you some more detail on Sam's second leg in the Aussie title race. Unlike some of the others, he is still in one piece.

It was a case of "so near but yet so far" for Sam Masters at the second round of the Australian titles held at Undera. Masters finished third overall behind Nick Morris and Mason Campton in a night tainted by the injury & withdrawal of some of the leading lights namely Josh Grajczonek and Justin Sedgmen which robbed the meeting of some of its entertainment value.

The night started off well enough for Sam with three very impressive early heat wins to stand at the top of the pile after three rounds. The challenge of Max Fricke was duly dealt with in heat one with Sam out of blue getting the edge on Fricke in red going into turn 1 and holding off the hard charging Fricke for the remainder of the race. In his second ride Sam in white had his main threat of Nick Morris outside him and again Masters got to the all important turn 1 to the good of Morris and that's the way it stayed for the remainder of the heat.

Sam's third ride seemed more difficult on paper, he was out of gate four with Sedgmen and Rohan Tungate drawn inside him. The task was made easier with the withdrawal of Sedgmen after an earlier off which saw Sedgmen high side his machine and end up in the fence. No real cause for concern though as Masters conjured up a brilliant gate to get round Tungate and disappear off into the distance for his third heat win on the trot

Masters fourth ride saw him up against Brady Kurtz and Kurtz produced a "one out of the box" ride to completely blitz the field.to easily take the lead and end up winning by half the length of the straight in one of the fastest times of the night Nothing Sam could do but he picked up a handy second to be equal leader after 4 rides with Kurtz on 11. Then came the low point of the night, after leading in his fifth ride Masters had what looked to be a recurrence of his fuel problem from the first round at Kurri Kurri and slowed allowing the entire field past him. He eventually got going again but found himself half a lap behind and from then on he was hoping for someone else's misfortune to pick up any points. It was a forlorn hope and a zero went on the scorecard.

The last place in his fifth ride meant that Sam was in the B final but with the first pick he chose the inside gate with Fricke, Holder and Waters on his outside. Another good gate saw him take out an easy win with Fricke and Holder following him home. In the final Sam had what ever gate that was left over after the other three riders had chosen and not unexpectedly found himself in yellow out of gate four. In a rerun final after Brady Kurtz had fallen and was excluded Sam found the task from out wide a bit too difficult with a fast starting Mason Campton being overtaken by Nick Morris with Sam unable to make any impact

The series moves on to Gillman on Friday with Sam leading the championship on 28 followed by Tungate, Kurtz and Fricke on 26 with Holder and Campton one further point behind.