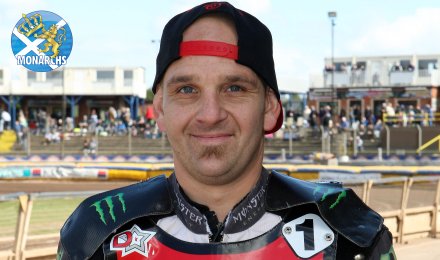 Ryan Fisher will always be an Armadale hero but on Friday he races in the colours of Peterborough Panthers, the latest team to try to break the unbeaten run of the Scotwaste Monarchs, currently standing at 20 matches.

Flyin' Ryan was a Monarch in 2008-10 and played a big part in the Premier League championship victories in 2008 and 2010, and several other trophies won in that period. His current side are a colourful international combination and it will be the first visit by Peterborough to Armadale since 1998.

Their boss Rick Frost decided at the end of last season to opt out of the Elite League and it looked for much of the winter as though the club which has been in continuous action since 1970 would go to the wall.

Fortunately Coventry owner Mick Horton stepped in at a late stage to save the day and revive the Panthers in the Premier League.

So in company with reigning champions Somerset, Peterborough can claim to have won the Premier League the last time they contested it!

FISHER BACK AT ARMADALE: Ryan Fisher signed for Monarchs at the start of the 2008 season and had three glorious years as a Monarch.

When he left to go full time in the Elite League he said "If it hadn't been for the Monarchs, I'd be flipping burgers in a MacDonalds".

Derek Sneddon is the only remaining Monarch who Ryan rode with, indeed they were often paired together, and Derek said this week "I'm sure there will be a few fans turning out to see Fish, and I'm looking forward to catching up with him, I haven't seen him since my Testimonial. Peterborough have a good lineup but I'm confident we can win."

RECORD CONTINUES: The Scotwaste Monarchs have now recorded 19 wins and a draw from their 20 matches this season.

They added an away win at Sheffield and a home win over Rye House at the end of last week, and if they win on Friday they will be going into July unbeaten this season, a quite incredible feat.

MATCH SPONSORS: The visit of Peterborough on Friday will be sponsored by Keyline Broxburn, regular backers of meetings at Armadale for many years.

INTERESTING PANTHERS: Peterborough have put together a very interesting side for their return to the Premier League.

Ryan Fisher of course is an outstanding no. 1 at this level, even though he has had personal problems this year with his family refused a visa to return to the UK and having to be based in Poland.

Ulrich Ostergaard is another with a very good Armadale record having won with Redcar several times.

British rider Lewis Blackbird was a British Finalist and is the most improved of the Panthers men.

On past performances their reserves don't look like a strong pair though Jacobs in particular is a rider with potential.

LAST MATCH AT RESERVE: Stevie Worrall has enjoyed a memorable three months in the Monarchs' reserve berth, having scored 215 points plus 30 bonus in 20 matches! However this Friday signals the end of his time at reserve, though there is no reason that he can't continue to do well in the top five of the team. Derek Sneddon will be the man to drop to reserve alongside Aaron Fox.

NEXT MEETING: On Friday 4th July Redcar Bears are the visitors to Armadale in the Premier League. Monarchs will have been at Redcar the previous day.